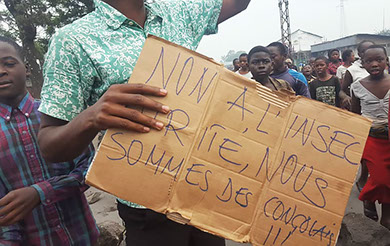 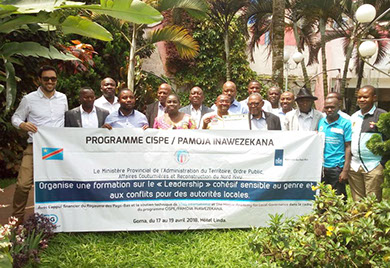 ‘You have an innovative method that allows everyone to identify security threats and problems, share and harmonize with others, and find compromises on priorities. It's really a very good participatory method’.

‘As a member of Parliament, it was necessary to participate in the training and understand the practical security diagnosis. It really was a capacity building activity that we all should get from the beginning of our mandate’.

then vice-president for Provincial Assembly of North Kivu.

and Migration by strengthening

DRC, Consortium for the Integrated Stabilisation and Peace of Eastern DRC (CISPE)

For decades, the eastern Democratic Republic of Congo has been scarred by international conflict and domestic war, the breakdown of the state and widespread corruption. During the last few years, the further proliferation of armed groups in the East has been notable. And whilst the army and police were increasingly deployed in the different areas, these have committed atrocities against the population it purportedly served to protect. An already fragile relationship between the state and citizen because of a lack of any economic development was further hurt.

In 2015, a consortium of the International Organization for Migration (IOM), Cordaid, PAX and VNG International started the programme “Pamoja Inawezekana” (“Together It Is Possible”) for the provinces of North-Kivu and Ituri, aiming to improve local security, promote dialogue in support of peace and link these results to local development initiatives and the rebuilding of trust between communities and government actors at all levels.

The continued guidance, training and support by a dedicated team of experts in Congolese local governance, has built significant confidence and credit with the members of the local administration, customary authority, civil society and selected members from the security services.

The programme was developed in line with the International Stabilisation and Security Support Strategy (ISSSS) and implemented in coordination with the Congolese stabilisation programme STAREC.