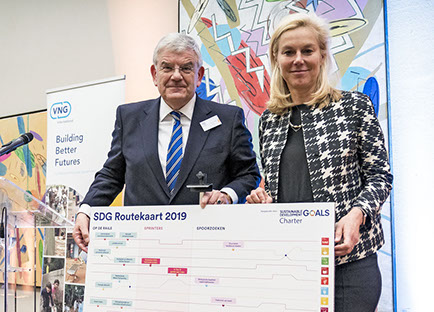 In our New Year’s meeting in January 2019, the Dutch Minister for International Trade and Cooperation, Ms. Sigrid Kaag, gave the main speech. Referring to VNG International’s slogan, the minister underlined the importance of well-functioning (local) governments for ‘Building Better Futures’ for citizens, for creating a stable and enabling environment for social and economic development. She praised VNG International for its important contribution in that respect.

VNG International actively contributes to policy development and knowledge sharing with and through the Dutch Ministry of Foreign Affairs. This varies from country specific platforms, through thematic areas such as security and rule of law as well as land registration, to our participation in the coordination meetings of SDG Focal Points of Dutch ministries.

For the third year in a row, and invited by the Dutch government, we wrote a chapter on the contributions by Dutch local governments, for the national report on the implementation of the SDGs. VNG President, Mayor Jan van Zanen, is also a member of the official Dutch delegation to the UN High Level Political Forum. In various ways (publication of guidelines, exchange of best practices, workshops, advice, organisation of joint events) we encourage Dutch municipalities to join their peers in our Municipalities4GlobalGoals campaign.

The SDGs are also an important point of reference for our policy work at international level, for instance in our work as Chair of the Capacity and Institution Building (CIB) Working Group of the global organization of United Cities and Local Governments (UCLG), with the Federation of Canadian Municipalities (FCM) as co-Chair. A study was done on SDGs and Local Government Associations (LGAs), through interviews with LGAs in Latvia, Ghana, Rwanda, Philippines, South Africa and Turkey. And three webinars were held in three languages on the SDG reporting module of UCLG, with broad participation by LGAs from all around the world. In another webinar one of VNG International experts shared the scenario planning tool for working in countries and cities in crisis.

In late 2018 the call for applications for the second edition of the UCLG Peace Prize, for which VNG International provides the secretariat and expert support, has been launched. This triannual award aims to celebrate successful local government initiatives in preventing conflicts, building bridges and dialogue after conflict and promoting peaceful coexistence. Five finalists will be invited to present their initiatives at the UCLG World Congress in Durban, South Africa, in November 2019. Furthermore, a publication on strong local government initiatives for peace will be produced to inspire local politicians in conflict-affected regions.

Our action to make the SPHERE humanitarian standards ‘urban proof’ and ‘local governance proof’ met with great success. We developed 34 amendments, suggestions and proposals for edits. 16 were literally adopted and additional 6 times we were significantly influential. With this action we got the debate about urban refugees down to a practical level, in the framework of the outreach component of our Local Government Resilience Programme.

The EU MADAD trust fund for the Syrian Crisis granted us a large grant for local government resilience in Lebanon and Iraq, through which we will work alongside a sister-programme by UN agencies. We see this as a valuable recognition of our point of view is that resilience work needs to start right next to humanitarian work, and that local governments and their longer-term plans for the development of their territories are useful in making the connection.

In its meeting in January 2019, VNG’s policy committee on European and International Affairs welcomed Minister of Foreign Affairs Stef Blok for a debate on the Future of Europe. The Minister stressed the importance of local diplomacy through platforms such as the Congress of Local and Regional Authorities of the Council of Europe. VNG International supports the municipal members of the Dutch delegation to the Congress. The Dutch delegation is actively involved in the Congress Action Plan against corruption and promoting public ethics. In April 2019 Mayor Wilma Delissen presented the report on fighting nepotism in local government. Mayor Jos Wienen was rapporteur on “Voting rights at local level as an element of successful long-term integration of migrants and IDPs in Europe’s municipalities and regions”.

VNG International also supported Mayor Hans Janssen, Committee of the Regions rapporteur for the Opinion “Neighbourhood and the world”. He strongly pledged for keeping a budget line for local authorities action in the new EU “Neighbourhood, Development and International Cooperation Instrument (NDICI)”. The European Parliament (EP) took over this position in one of their amendments to the text of the European Commission (EC). Negotiations between the Council, the EP and the EC will take place later in 2019. In the meantime we continue our inputs through the Dutch Ministry of Foreign Affairs and DG DEVCO.

Another channel through which we contributed to the advocacy for space and budget for local authorities in the next EU multiannual financial framework (2021-2027) is PLATFORMA, the European coalition of local and regional governments – and their associations – active in city-to-city and region-to-region development cooperation. Mayor Wobine Buijs gave a presentation in the Policy Forum on Development, and we were represented in the EU delegations conference, European Development Days.

VNG International continued being an active member of the Development Partners Network on Decentralisation and Local Governance (DELOG), after having hosted, in May 2018, the network’s annual meeting in The Hague. DELOG is a group of 29 bi- and multilateral development partners, organisations and associates.