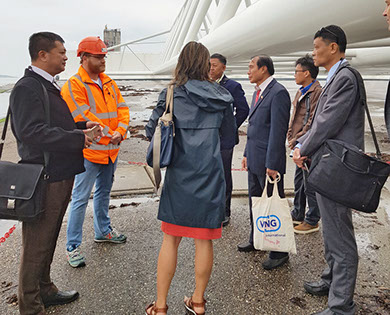 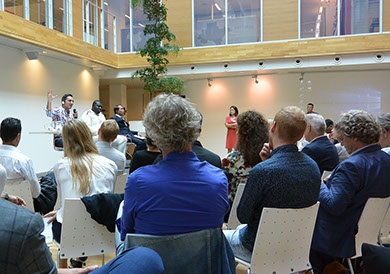 In September 2018 the Pathein delegation visited the Netherlands. The Region DAO Director (Maung Naing Lin Acting Director Region Development Affairs Organization Irrawaddy Region) said: ‘One of the lessons learned is the success formula from some Dutch municipalities, where the local government takes up the big projects and enables citizens to come up with small projects.’

U Kyaw Myint, minister of development affairs of the Ayeyarwady region, in which Pathein is situated, points out that his coastal city in the south of Myanmar suffers from climate change. Every year the city is hit by floods. Storms cause many casualties and destroy houses and crops. The Myanmar representative believes the government has to initiate the action. ‘But I believe that people will join then. It takes time, but people will come.’

Another member of the audience asks about the main obstacles for inclusive green growth. The mayor of Pereira (Colombia), Juan Pablo Gallo answers that most people expect changes to come from the government, for example regarding waste. ‘But we can’t provide effective solutions when the people themselves do not contribute, for example by separating their waste. Transformation is only possible when the people are involved.’

On 14 March 2019, the city of Beira in Mozambique was severely hit by hurricane IDAI. Large parts of the city were flooded, inhabitants were killed, and a lot of material damage was done to homes and public buildings. The municipality plays a central role in the emergency aid and in recovery. Our work in the framework of the DEALS program for Beira will be revised.

Core activities of the DEALS program in 2018 consisted, among others, of a study visit by four of the DEALS cities to the Netherlands, the recruitment of local long-term experts, and the selection of pilot areas, the building of trust between all stakeholders, and the further development of the themes chosen for each of the participating cities.

So far the most relevant results can be summarised as follows:

An increasing proportion of the world's population lives in cities. In 2030 this is expected to be sixty percent. Urban governments and governmental organisations face unprecedented challenges in terms of quality of life, employment, safety and the environment. Their vision and performance in the coming decades will be determinative for the future of cities.

Our drive is to improve the performance of the local governments in this cooperation. This is necessary because local and urban government is becoming increasingly important and complex. There is a growing need for a collaborative, responsive and flexible municipality. Our ultimate goal is to keep the cities of the future alive and sustainable. Our main focus is on the interests of people earning less than 1.25 US dollars a day.

The cities in the DEALS programme are Kumasi (Ghana), Sèmè-Podji (Benin), Pathein (Myanmar), Pereira (Colombia), Beira (Mozambique) and Manila (Philippines). For each city, a program is tailor-made based on local priorities.